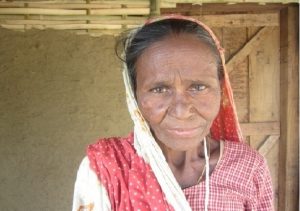 . She is a Christian and lives in a small village in Dhanusha and was the facilitator for the local Self Help Group that was established in 2004 under the NLT Stigma Elimination Programme, in her village. Because she was able to get treatment for leprosy quickly, her disabilities were limited and she was able to support her group members effectively for some years before handing over to an active younger member. This support included bringing members of the group to Lalgadh for help and treatment, and supporting them through their difficulties. Although she continued to be a member of the group, she felt less useful and her son and daughter-in-law, sadly, were not supportive. This, along with a house in very poor shape and no useful income, left Sumitra in a vulnerable situation. The NLT Socio-economic Rehab (SER) team helped out with a small monthly allowance to make sure that Sumitra had the basic necessities to live on. Because her house was damaged and in need of repairs, which increased her vulnerability in the colder January weather, the SER team set about constructing a new house.

a is now associated with NLT’s Village Alive Project (VAP) which works to uplift the wellbeing of dalits, women, poor and sick people. The VAP gave her a loan of Rs 10,000/- for goat rearing so that she can improve her economic capacity. The goat has now a kid which will help Sumitra.

Sumitra now feels she has purpose in her life again to support other needy people. During a follow up visit in Sumitra’s house, she was happier because her daughter in law had become more supportive and her community respected her because of  her tireless efforts and commitment towards improving the lives of leprosy affected, disabled and marginalized people. As Sumitra has become older, NLT has included her in its “Sponsor a Grandparent” scheme which provides a small allowance that means Sumitra has a little more comfort and support in her old age.