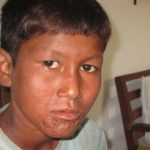 Keshav lives in a remote village in the Sarlahi district in south-eastern Nepal. Keshav’s family have lived there for more than two decades and belong to an untouchable caste in the social hierarchy in Terai region. There are only 5 other households around their home.

About two years ago, Keshav developed some nodules on his face but his parents were too busy trying to scrape a living to pay much attention. Now, Keshav is 13 years old, and nodules are showing all over his body. One of his neighbors recently persuaded his parents and Keshav to visit Lalgadh Leprosy Services Centre (LLSC) for treatment because she thought he might have leprosy as Keshav’s symptoms were similar to her brother’s, and he had been treated at LLSC.

Keshav visited Lalgadh in May 2015 for treatment, and was diagnosed with serious (MB) leprosy, having a high Bacterial Index. Physio staff found some impairment in his right hand and he was put on a 24 months treatment, including steroids for 2 weeks to reduce the nerve damage. He was counseled about leprosy and its problems and the best way to prevent them. Keshav listened to all this very carefully and agreed to join the Self Care Training Centre (SCTC) which educates people with leprosy about how to care for themselves with simple  techniques to prevent the onset or worsening of disability. He worked hard in the SCTC and realized on his second day there that his parents and a sister also had symptoms of leprosy. He shared this with the SCTC staff and asked if he could bring his whole family to Lalgadh for treatment.

Within a few days, Keshav’s mother, father, and his sister Alisha were all diagnosed with leprosy. They were also found to have high Bacterial Index test results and his mother and father were put onto 24 months of treatment and his sister 12 months of treatment. They all joined the Self Care Training Centre for two weeks to share in the training that Keshav had been receiving. The Socio-economic Rehabilitation unit visited Keshav’s Home and found that Keshav’s family was extremely poor and that Keshav’s parents were very simple folk who got by with labouring work at the local block factory, but struggled daily to meet their basic needs. They have only a tiny piece of land for cultivation and live on temporary land in a small house which does not even belong to them. Keshav’s mother, Parbati had had tuberculosis and is very concerned about her family’s future.  His father is not strong and his sister Alisha is 7 years old and has never been to school. This is partly due to poverty, and partly because they have to move from place to place following seasonal work. Keshav was reading in class 4 but had to miss the last year and work to help his family. Being from a low caste, Keshav’s family is not allowed to be involved in community affairs by the wider community, which increases their isolation.

Lalgadh Leprosy Services Centre is helping this family with counseling, advocacy, education and income generating activities. Alisha is already selected for school sponsorship and has been encouraged to read in nursery in Government School. Keshav is being persuaded to enroll in class 4. LLSC is making concrete efforts to improve the socio-economic situation of Keshav’s family, and will build on the self care training that should help to minimize their disabilities.

Since then, LLSC has advocated for land for the family and the extended family has now formally granted Keshav’s family a piece of land which now belongs to them. The British charity called Lepra, gave us some money to help poor families affected by leprosy and we were able to allocate part of this to Keshav’s family so that they could build a house for themselves to live in. Our staff assisted with that and now the family have their own house on their own land, and things are looking better for them.