Mainudin Dafali, now aged 48, suffered stigma and rejection all his life because he came from a family affected by leprosy. His own symptoms began when he was very young but he was not diagnosed with leprosy until he was nine years old, when a healthcare survey team saw him walking across a field and recognized his limp as being caused by leprosy. At that time he was working as a buffalo herdsman for a local landlord but when the landlord realized that Mainudin had leprosy, he dismissed him from his work, using the excuse that he only employed Hindus, and that Mainudin was a Muslim.

Mainudin went to a local health post and was given some dapsone medicine for his leprosy, and took that for nine years. However, he still became increasingly deformed as untreated nerve damage progressed, and he developed clawed fingers and foot ulcers. Once these signs were visible, his family increasingly abused him, and the community would not allow him to take part in any social occasions. Mainudin returned to the health post with his ulcer problems and they directed him to Lalgadh Hospital. Unfortunately at that time in the very early 1990s, there were only five beds there and they were full, but the little team at Lalgadh gave him some wound care materials, taught him some self-care, and told him “not to worry – they would always look after him”. These words were music to Mainudin’s ears and the first “caring” words he had received for a long time. Later, Mainudin had to have his right leg amputated due to the chronic ulcer damage in his foot, but Lalgadh lived up to its promise and has continued to care for him.

Although Mainudin had never had the chance to learn to read and write because he was not allowed to attend school, he was an intelligent young man and saw people at Lalgadh who were worse off than himself. This inspired him to help himself and others. He became involved in a pilot project for the Stigma Elimination Programme (STEP) run by Lalgadh Hospital, with the aim of social and economic integration of people affected by leprosy through establishing Self Help Groups. Mainudin became one of the members of the Kopaleshwor SHG during the project. In the beginning, he was very shy and unable to express his views in the group but slowly, a significant change came about as Mainudin learned to read and write, gained in confidence, and started to take an active part in his group. This also improved his family’s view of him and they became more supportive.

Mainudin became the facilitator for the Kopaleshwar group, and has been leading it ever since, helping the group became one of the largest and most successful of the many SHGs formed. It subsequently become part of the NGO Federation of SHGs in Dhanusha district, which works in partnership with LLHSC and has greatly helped the expansion of the SHG programme for the last ten years.

Mainudin and his SHG have played an important role in improving the social and economic integration of people affected by leprosy and other marginalizing conditions, as well as in the reduction of stigma due to leprosy in the local community. This has improved the status and lives of many leprosy-affected, marginalized and disabled people in his Village Development Committee area, through income generation, literacy and scholarship activities carried out through the group. Mainudin is always in front running the campaigns to raise awareness and reduce stigma related to leprosy, and the Kopaleshwor group has been involved in building toilets, installing hand-

pumps for safe drinking water, conducting skills development trainings in the community and even setting up a blood bank. Mainudin himself has found 42 new new cases of leprosy, and has brought 3 absentee cases back for treatment. It is the courage, enthusiasm and effort of people like Mainudin, which is the key to overcoming leprosy and stigma. Mainudin was given the Wellesley Bailey award in 2011 in Thailand for his services to Leprosy work which was a just recognition for his effort.

Mainudin is now the president of the Dhanusha District self-help groups and spends much of his time coordinating their activities. To help him with this, in 2018 NLT UK and NLT Ireland provided an adapted motorcycle for him to use for his SHG work, and this has saved him a lot of time.

Although his public face has been cheerful and is well known, his home life has always been unhappy, and he was resigned to never being able to have a wife and family of his own. His accommodation became problematic in late 2018, and so NLT UK made some funds available to buy land for Mainudin and to build a house for him. The Community Dept at Lalgadh Hospital organized the purchase and building during late 2019, and this has changed Mainudin’s life. While the house was being built he proposed to a lady called Sakila, who

is also affected by leprosy and has often been an inpatient at Lalgadh Hospital. Her life is also hard because of ulcers and ostracism caused by leprosy, and she accepted Mainudin’s proposal, and her family also approved. Staff at

Lalgadh raised the funds for the wedding and on 29th December 2019, they were married. Sakila’s father attended, along with the local community, who were supportive and accepting despite the visible damage that leprosy has done to Mainudin and Sakila, and have asked

them to visit their houses.

This represents a new chapter for Mainudin and Sakila, and we wish them every happiness, and success for their future. 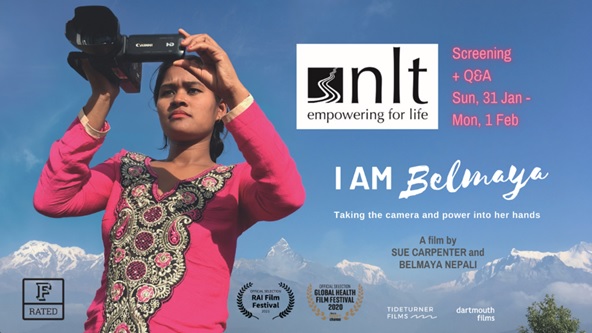 Gifts from afar!! They will be very welcome in the Septic Surgery Department and certainly put to use straight away. #Leprosy nlt.org.uk/gifts-from-afa… So a very big thank you to Moira and Alisdair Murray for your very useful gift. 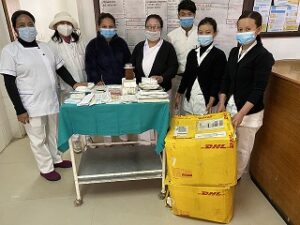