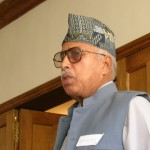 We are sorry to report the death of Lazarus Bhattarai who passed away in February 2012 at Manipal Hospital in Pokhara. Some of you may have met Lazarus when he visited the UK on more than one occasion during his time as the Chairman of NLT Nepal.

Lazarus was a bank manager for the Nepal National Bank and became a Christian after he contracted leprosy and received treatment in Green Pastures Hospital under the care of Eileen Lodge. Whilst in Green Pastures, he was encouraged to use his education to start a school in the hospital for the children of other patients. He did so and the school continues today.

Lazarus’s real name was Nar Bahadur Bhattarai and he had no interest in Christianity, in fact he was hard against it, although grateful for the help he had received from the Christian staff at Green Pastures. However, one night a student at his school asked him to read and explain a Christian booklet, because the boy could not read it himself. Lazarus could not sleep that night for thinking about himself in the context of what the booklet had said about sin and about Jesus the Saviour of sinners, and realized that he needed Jesus himself. He became a christian and renamed himself Lazarus because he felt he had been “brought back from death”.

In 1992 Lazarus retired from the bank and became the Principal of the new Pokhara Bible School, as well as being Chairman of Nepal Leprosy Trust for several years. Nepal Leprosy Trust has been deeply grateful for his support, guidance and friendship over many years, and our thoughts and prayers are with his family and friends as they face life without Lazarus.