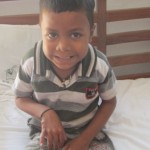 At Lalgadh we see a lot of children, and sadly leprosy does not spare them. Kunal is an energetic, funny and caring little 6 year old boy who lives with his younger brother and mum. They are very poor and so cannot afford school fees, but because Kunal is so bright and fun, the teachers at the local school allow him to attend even though he cannot pay. Home life is not easy as Kunal’s father has difficulties with alcohol and cannot support the family.

Last year (2013) Kunal injured his hand on some bamboo and after this his little finger began to claw and a small lump and an ulcer appeared.

Various local opinions put it down to cancer and even an attack from a witch. A faith healer chanted mantras to combat this and Kunal’s mum made offerings to the various local gods and goddesses, but nothing improved for Kunal. Then a Muslim lady in the village recommended that she take Kunal to Lalgadh Leprosy Services Centre and, in March this year, she came.

Kunal was diagnosed with the milder form of leprosy and given treatment for that, along with counselling for him and his mum to help them understand the dangers that leprosy and the treatment can bring. Kunal joined the Self Care Training Centre training programme where he learned how to take care of his hand and how to heal wounds and ulcers that come from injuries to his numb hand. A serious problem with leprosy is that it can cause loss of sensation in hands and feet, which means that people affected in this way cannot feel injuries or damage that occur while they are working, etc. Without the right care this can lead to infection and ulcers, with serious damage to tissue and bone. Kunal and his mum learned how to avoid this damage and how to take care of it if it does occurs. His ulcer is now healed, and Kunal is back at home and doing well. Without effective intervention from Lalgadh, Kunal may have become significantly disabled – a tragedy for such a young child.