The Opening of our new Pharmacy Extension happened on 22 August 2016.

The result of much Vision, Faith, Planning, Funding and persevering Labour of Love from the Team.

The old Pharmacy of Lalgadh Hospital ha been over stretched every day for a long time! Only last Sunday (21 August) there were large numbers of patients seeking treatment (including 73 leprosy)  it was a very 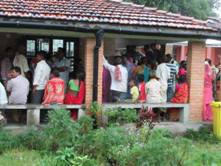 crowded and chaotic queuing in the hot and humid monsoonal weather trying to get their prescribed medications.

But then last Monday (645 patients) we had THE OPENING OF OUR PHARMACY EXTENSION – comprising both a new modern pharmacy dispensary, and a modern medical storeroom.

The opening ceremony was a mere 30 minutes (hot weather, crowds of curious onlookers (waiting for their medications).

• Samuel (OPD Manager) was Master of Ceremony
• Dambar (Program Director) opened the Opening Ceremony with thanks to all …
• Nirmala Sharma (Country Coordinator, FAIRMED) spoke of her organisation’s gladness to support;
• Jim Oehrig (ALM Vice President, Integral Mission) – spoke of our gratitude and service to God with this facility; 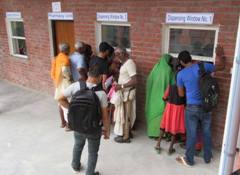 • Sarita and Dr Krishna gave thanks with opening & closing prayers

Then the ribbon was cut by the hands of Dambar, Nirmala, Jim together … and in we all streamed.

Finally, within 10 minutes, the staff got down to work receiving prescriptions and dispensing medications through the three new dispensing windows, to the hundreds of waiting patients.