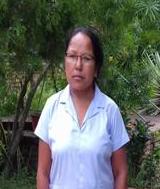 Gujeshwari Shrestha is 47 years old and has been working at Lalgadh hospital for the last 18 years as a night orderly.  She first came as a young leprosy patient herself, and was admitted to the inpatient department with an allergic reaction to one of the anti-leprosy medicines she was taking at the time. As an educated woman, her experience of the care and treatment she received at Lalgadh and the difficulties experienced by other patients, made her want to help others in the same situation as herself, and led her to become a member of staff. Later on she met her future husband when he came as an inpatient through leprosy.

The effects of leprosy on Gujeshwari have left her with numb feet and a numb right hand, and the fingers on her right hand have become clawed. Because her husband has lepra reactions from time to time, he is unable to do regular work and Gujeshwari is the main breadwinner.

Gujeshwari for some years has been suffering from pain in her neck and odd sensations in her head, including a feeling that something is crawling around in her head.  Sleeping is difficult due to the head and neck pain and life is difficult. Investigations by a specialist in Kathmandu have shown that she has a pinched nerve in her neck and that an operation can relieve the pain and strange feelings. The surgery involved would include a week’s stay in a Kathmandu hospital and would cost about Rs 3,00,000, which is about £2,300.

If you are able, please help Gujeshwari access this operation by contributing towards the cost. It will change her life.

You can use the donation button at the top of this page.