The community called “Zero Mile” first came to our attention when several very poor villagers with leprosy came to Lalgadh Leprosy Services Centre for help back in the 1990s. When their situation was followed up, we found that there were about 25 people living in tiny hovels along a dusty track that led off from the “Zero Mile” junction on the outskirts of Janakpur. Some of their “homes” were only about 6 feet by 5 feet in size and they had come together having been thrown out of various situations due to their disfigurement, ulcers, and destitution. One or two of the women had babies and they were all very caring for each other and live mainly by begging.

They became a target for our support and were regular visitors to Lalgadh and we to their little community as we sought to improve their situation. For some time they were under threat from the local temple authorities on whose land they were living, and a bulldozer was scheduled to erase their homes from the temple land. We advocated on their behalf in an attempt to persuade the authorities to give them some land as the temple owned large tracts of land in the area. This was unsuccessful but at least the bulldozer did not come. 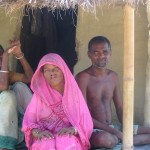 NLT’s contact and support has continued so that these folk were able to maintain their health, and their disabilities due to leprosy were monitored and cared for. We were recently very thrilled in the UK to discover that a lady from the Janakpur area has donated some land and funded the construction of a simple but substantial building for the Zero Mile community. This has given them their own place and some proper security and the new home was officially celebrated in January this year on World Leprosy Day. There are now 56 residents including 15 affected by leprosy.